There are a ton of different weapons in D&D and despite your best intentions as a dungeon master, some of the finer details are likely slipping through your fingers. When running a game, it’s important to know what weapons your players are using and how they’re using them. A group that is using two-weapon fighting will have a wildly different damage output per round than one that is using mostly casters or ranged attacks. In this guide we’ll look at weapons in their entirety so you know how to better give your players balanced, fun encounters that work with their weapon load-out.

D&D weapons come in several different categories and deal different types of damage. On top of this, there are weapon modifiers that give a weapon different properties. We will go over each in turn.

Beyond simple and martial weapons, D&D has two main weapon types: Melee and Ranged. Melee weapons are what you use for close combat, ranged weapons are for combat typically 10 feet and further away. 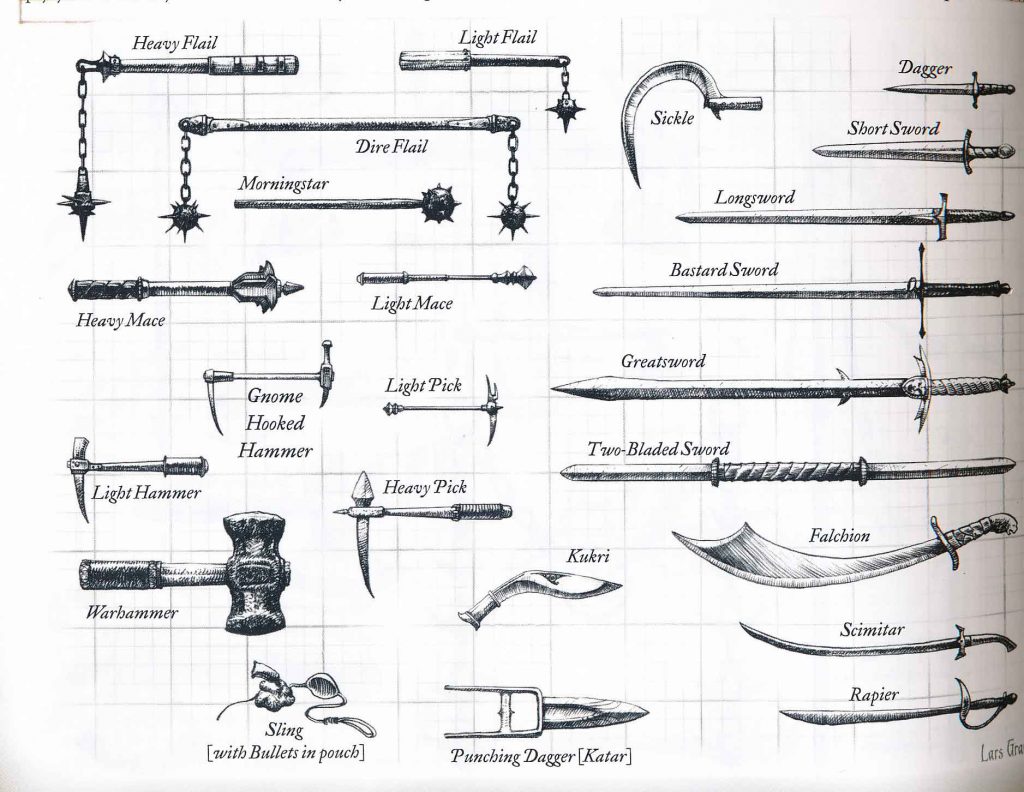 The following list explains all the weapon properties there are: 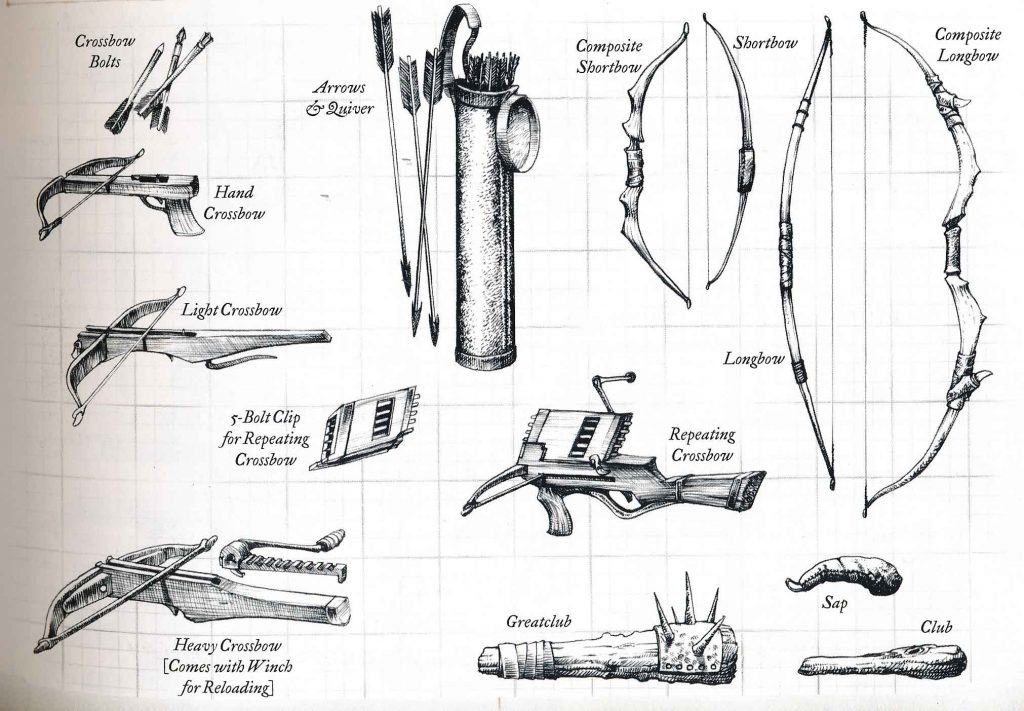 Weapon proficiencies are easier than ever in 5e. Proficiencies for weapons are based around their two categories: simple and martial. If you are proficient with simple and martial weapons, you can use all weapons with your proficiency bonus added to your rolls. Beyond this a character might have proficiency with a certain set of weapons, typically determined by either their race or class. A character could have proficiency with all simple weapons and some martial weapons. It’s really all down to what they would have training to accommodate.

Proficiency is not what weapons a player can use! All characters can use all weapons, but if you are not proficient, you do not get to add your proficiency modifier to your attack roll. I see people all the time saying they don’t have proficiency in a weapon so they can’t use it. This is wrong! You can use it, you just are not trained in it, so you don’t get your proficiency modifier. This makes it harder for you to hit things, which makes sense from a role play standpoint. Enemies might notice this lack of training and act accordingly. 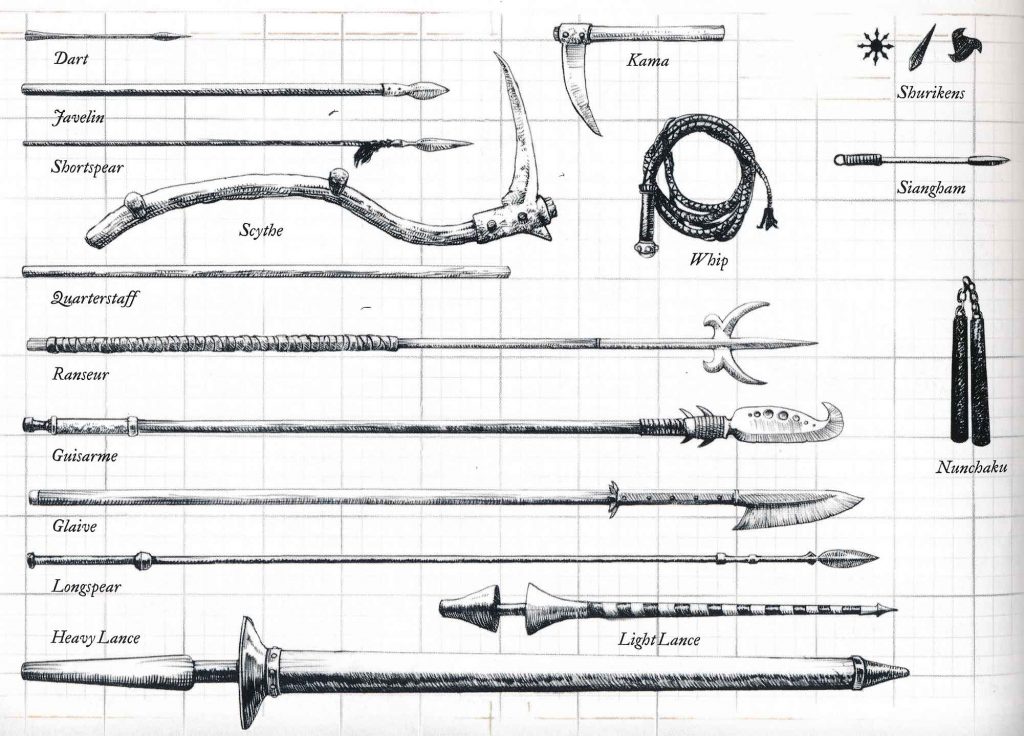 The core rule books offers a way for players to gain proficiency with weapons they do not have through use of the Weapon Master feat. When you would normally be able to take a feat, you may choose to take the Weapon Master feat. In addition to its other benefits, this feat gives you four weapon proficiencies of your choosing. This can be a great way to customize a character and should be pointed out as an option for your players. This is how we get muscle wizards using great swords in combat!

Weapons do a wide variety of damage. If you look at what weapons your group is using, you can calculate the average damage output per round. This is super useful when trying to balance encounters. Instead of making the creatures hit harder, sometimes you just need to give them more HP. The following list shows a general outline for the damage for different weapons. This is not an exhaustive list, but should be used more as a rule of thumb: 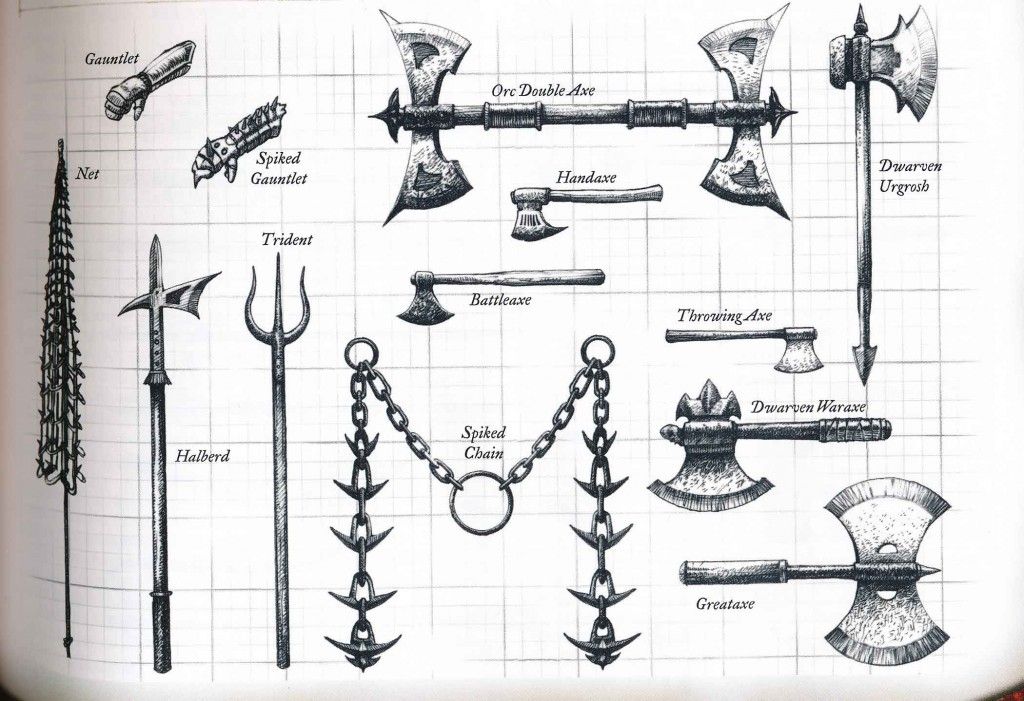 When looking at a player’s damage output from weapons, you can start by assessing their weapons dice. Anything that is a simple 1dx damage roll will have an average of 1/2 (x+1) since you cannot roll a zero. Damage rolls that are 2dx will instead have an average of 1/2 (2x+2) since each die cannot be 0. That gives you the following average damage outputs per attack for standard weapons:

If you want to calculate any average for damage from any dice combo you can use the follow equation: 1/2 (nx+n), where x is the number of sides on the die and n is the number of dice. It is also worth noting that the more dice that are rolled for any given scenario, the more towards the average your team will trend. If you are a huge nerd and love math, there’s an online dice roll calculator you can look at to really get an idea of how the numbers work out.

If you are really interested in using this method for balance, one thing you can try is to make the total HP of the creatures on the field equal to 10 times the average damage output per round for a large/boss encounter. A level 1 group of 4 players could average between 25-40 damage per round, so a big fight should have 250 to 400 hp between creatures on the field. To scale for smaller encounters, simply cut the multiplier. Small combats should be 2-3 times the average, and a medium one should be 5-6 times. Also, be sure to adjust the multiplier down by 2 for each average point of AC above 13 your creatures have, at least at low levels.

You can also use this principle backwards to decide how hard your monsters should hit! By taking the average weapon damage and calculating how much damage your monsters do per round, you can compare to the players’ total HP and get a sense of balance. If you calculate both totals, a decisive fight can be found where the player and monster HP totals vs damage output are roughly equal. This can make the fight have a lot of close calls, but still be balanced for the players.

Now that you know about weapon damage output, it’s important to talk about damage types. Excluding magical weapons, there are three types of damage that weapons do. The damage types are slashing, piercing, and bludgeon and for the most part don’t change things too much. These mostly come into play when something has resistance to damage. A damage resistance means you take half damage from the attack, and a damage vulnerability means you take double damage from an attack. Skeletons are a good example of vulnerabilities as they are vulnerable to bludgeoning damage while slashing and piercing damage affects them normally. Scarecrows on the other hand are resistant to bludgeoning, slashing, and piercing, making them tough to kill with normal weapons.

Just like weapon proficiency, we see a lot of players getting two-weapon fighting wrong. The rules are lightly explained in the Players Handbook, but two-weapon fighting is easier than you think. If you are using a light weapon to make an attack, you can use your bonus action to attack with a weapon in your other hand, so long as it is also a light melee weapon. Any character may do this. The second attack does not get the ability modifier you would normally use for damage, but the attack roll is made normally. The PHB does not specify that the attack has to be on the same target either, which opens up a lot of combat options for players.

The options are even better if the weapon can be used as a thrown weapon. If it can, you can choose a new target and throw that weapon as your bonus attack, but you still will not get the bonus to attack damage. Hypothetically, you could attack an enemy near you and make an additional ranged attack by throwing a dagger at another nearby target. In following the rules of two-weapon fighting, you can make any character a lot more dangerous and increase the damage output of both players and NPCs.

In Dungeons and Dragons there are tons of ways that players can use weapons and a lot of creative ways to role play with those weapons. In future articles we will cover the magical and semi-magical traits that were not covered here and expand this guide a bit further. If you have questions or comments please let us know and be sure to reach out and tell us what you want us to write about next!