Food is so much more than just sustenance. It can describe a person’s whole life. Eating the food of your culture, whether it’s the culture you grew up with or the culture you adopted, informs people of your life’s history. By using food and DnD together, you can add elements to your campaign that will make your world feel more real with relatively little effort.

But what about food outside of your campaign? Players and DMs get hungry too…

Most fantasy books excel at including descriptions of the foods their characters eat. Entire pages are often devoted to an author’s love letter to food. Fantasy authors make good use of food descriptions to give readers a very personal insight into their characters and the world they live in.

When we think of food in The Lord of the Rings, elven lembas bread is probably the first thing that comes to mind. But when we consider that hobbits are known for being ravenous eaters, it’s worth looking back on Tolkien’s meal descriptions. Just take a look at what the four hobbits were served at the Prancing Pony:

In a twinkling table was laid. There was hot soup, cold meats, a blackberry tart, new loaves, slabs of butter, and half a ripe cheese: good plain food, as good as the Shire could show, and homelike enough to dispel the last of Sam’s misgivings (already much relieved by the excellence of beer).

– The Fellowship of the Ring, Chapter 9

Good plain food. Good enough to remind Sam of home and relieve the weariness of travel. The type of food that warms your belly, makes you think of your mother, and lets you momentarily forget about the nightmares of your travel. This type of food is endemic to the hobbits of the Shire and will be used as a starting point for the other foods introduced throughout the series. 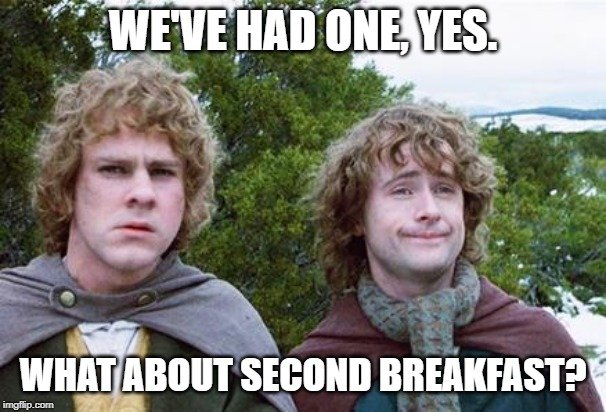 Martin’s A Song of Ice and Fire series also includes food in a loving manner. There are pages of description for the food at Joffrey’s wedding feast and most of us are probably very familiar with how much Sansa loves lemon cakes. But to me, the meal Tyrion eats while staying with Magister Illyrio says the most:

They began with a broth of crab and monkfish, and cold egg lime soup as well. Then came quails in honey, a saddle of lamb, goose livers drowned in wine, buttered parsnips, and suckling pig. The sight of it all made Tyrion feel queasy, but he forced himself to try a spoon of soup for the sake of politeness, and once he had tasted it he was lost. The cooks might be old and fat, but they knew their business. He had never eaten so well, even at court.

– A Dance with Dragons, Chapter 1

A man who grew up with great food as a member of a major house and was then served by the best cooks in King’s Landing when he was Hand of the King is stopped in his tracks by soup. For a man that wasn’t even hungry before he began eating, he completely loses himself to the meal after his first bite. The food in this scene must be almost transcendent in flavor.

We’ve talked about the different aspects of world building in previous articles, but we haven’t touched much on food and DnD. It’s easy to default to using foods based on those of medieval Europe. It makes sense; magic, knights, castles, and dragons remind us of Arthurian legends. But your DnD world doesn’t have to be restricted to the cuisine of our world.

Where do you begin with a subject like food that has so much depth? When it comes to food and DnD in your campaign, it can best be broken down into three important categories.

The ecological resources of your world have a dramatic impact on the inhabitants. If a resource doesn’t exist in your world, obviously people aren’t going to be able to eat it. Or perhaps it does, but it’s so rare or on an undiscovered island that people in your world believe it doesn’t exist.

We can look at the history of the tomato as an example. Its origins can be traced back to its cultivation by the Aztecs with scholars dating their domestication around 500 B.C. But it wasn’t until 16th century that Europeans were able to really get their hands on them, and it was longer still before they were a common cooking staple. While one type of food may be common in one area, it may be considered exotic in another.

Climate plays a key factor in what foods will grow. Tundra cultures may be limited in their variety, sustaining heavily on fish, berries, roots, and other wild animals. Tropical regions may have more options where different types of plant and animal life can more easily flourish. Even if you’re an island in the middle of an ocean, there must be renewable food resources there to sustain a population. What is available for your players to eat after they run out of trail rations?

The divide in wealth will always play a factor in the types of food that people eat. There are startling differences in what is available at different price points. People can often be grouped together based on what they are able to eat.

We’ll use A Clash of Kings as an example. In the same book, two groups of characters are eating vastly different meals. In the first, Cersei and Tyrion have a meal together in King’s Landing:

And then we compare it to the way Arya was eating on the road after leaving King’s Landing:

She had broken her fast on some acorn paste and a handful of bugs. Bugs weren’t so bad when you got used to them. Worms were worse, but still not as bad as the pain in your belly after days without food. Finding bugs was easy, all you had to do was kick over a rock. Arya had eaten a bug once when she was little, just to make Sansa screech, so she hadn’t been afraid to eat another.

The two examples highlight the difference between eating for pleasure (because you can afford to) versus eating out of necessity (that necessity being not starving to death). Royals will always eat better than the peasants. At least until a revolt happens. That’s why it’s so important for the ruling classes to keep their populations fed.

Not only can socioeconomic inequalities affect the choices of food, it can affect the health and quality of food. In the U.S. there are communities who are considered to be in “food deserts” because they lack food stores that sell healthy foods like fruits and vegetables. Those communities must either rely on unhealthy, processed foods or make arrangements to travel sometimes great distances for nutritious options (you can read more about food deserts here).

We often see these differences in literature as well. Every setting has their form of “I’m pretty sure this is food.” Whether it’s the gruel from Oliver Twist or the pinkish-grey stew in 1984, authors make us suffer with their character’s poverty. If we’re really lucky, the author lets us see how the other half eats as a reward. The loving descriptions some authors give their food only creates envy from their readers. You should be doing the same thing to your players.

With the exception of fasting observances, no holiday is without its special foods. In America we typically have hot dogs and hamburgers for the 4th of July, candy for Halloween, turkey for Thanksgiving, and we leave cookies for Santa on Christmas. That’s only 4 of our holidays, and all of them have their own fare.

There is usually a reason that a particular type of food is served for a holiday. Special meals and their associated holidays are usually to mark some kind of celebration. These holiday and traditional meals are often rooted in religion. We see this highlighted with the Jewish holiday of Hanukkah. It celebrates the miracle of the one cruse of oil lasting eight days, so the holiday is just as long. Latkes and other oily foods are also eaten on Hanukkah in honor of the miracle of the cruse of oil.

Perhaps one religious celebration was appropriated by another. Why does a giant rabbit leave chocolate eggs for Easter? Generally, if foods or rituals seem odd or mashed together, a conquering people were engaging in cultural colonialism.

Adding Food to Your Game

Combining food and DnD to your home game takes some consideration. Wizards has a random tavern generator that also includes the tavern’s menu. The Player’s Handbook has a very small entry on food, drink, and lodging. But for the most part, food and DnD is entirely in your hands.

When creating your world, try to ask yourself the following questions:

Adding Food to Your Table

We know DnD sessions can get long. All of our sessions are 4 or more hours. Ensuring that both the players and DM are well fed can go a long way in creating a positive gaming environment. Whether it’s something as simple as ordering pizza or going all out and trying to recreate your favorite fantasy recipes, food and DnD should never get in the way of each other.

Try to split the costs or the workload. Having a potluck for your sessions is a great way to maximize food choice and minimize slaving away in the kitchen. If you have a group member who loves to cook, offer to bring a side dish or help support the cost of the ingredients. Do whatever works best for your group. Just make sure you eat.

That leads us to announcing a new category of articles that we’ll be posting on the blog. Feasting and Fighting articles will include a recreated recipe that you’ll be able to follow, step by step. Also included will be a tavern filled with NPCs. We hope to build up different menus for different taverns that will allow us to highlight the possible differences in cuisine across a DnD world. A fun secondary side effect is that you’ll be able to create food for your DnD group that is thematic and has its own backstory.

If you have any recipes from fantasy settings you’d like us to reproduce or ideas from your own homebrew world you’d like to see come to life, you can find us on Twitter or email us at askyourdm@gmail.com.