Spells are a core part of most DnD games. They fill the world with magic. They enhance combat. They even lend large parts to your story. With DnD 5e you have over 450 spells to choose from in the game. This doesn’t even include all of the Unearthed Arcana, companion material, or official third party content. Even with all this to choose from, sometimes you want to know how to make a homebrew spell of your own. Here’s how you do that.

How to Make a Homebrew Spell, Step by Step

This step seems obvious, but really needs to be stated. There are over 450 spells already created. Before you get your creative juices flowing, take a step back and do a search of what’s already available. Likely there is a spell that does what you want or something similar. If you don’t find your spell, on to step 2. If you do find your spell, or something very close, look at what modifications would be necessary for it to function the way you want. Sometimes it’s just a class change or minor step away from what you need.

Here’s where the creative part comes in. You didn’t find the spell you were looking for, so now you need to flesh out the idea you have. To make this step easier, don’t try to do everything at once. Start by just describing the effect. Don’t give it a level, choose damage, or decide on components. All of the detail comes after the initial concept is set.

A Spell Example: Serpent’s Grasp – illusory snakes encircle a creature and restrict them with force. If the spell is successful they take damage each turn for the duration and are restrained.

With this example (unbalanced and non-specific) we get a glimpse of what the final spell will look like. We haven’t set anything more than the effect at this point, but we can already see where we need to go next with the spell specifics to complete it and then make it balanced. The effects chosen for the example are similar to hold person or entangle, but also offer damage and some light flavoring.

In this step we set up the details that are critical to spell’s initial balance and use. School is easiest because you match what the spell does to the school it belongs to.

Casting time requires a bit more thought. If you want it to be used in combat, the casting time is usually 1 action or 1 bonus action. If the spell is going to be used outside of combat, make sure its casting time is appropriate for its function and usefulness (the better it is, the longer it should take to cast, in general).

Duration is another part that takes thought. If you use it in combat your typical durations are instant, 1 round, 1 minute, 10 minutes. If it lasts longer than a round, it should also have Concentration in most cases. Sometimes, even shorter spells should require concentration to make up for their strength and balance the game.

Try to give stronger spells more components and weaker ones less. Utility spells can often be used with a single component, such as only verbal or only somatic, to make them more useful in tough situations where players may be silenced or restrained.

Serpent’s Grasp
School: Enchantment
Components: V, S, M (a small live asp)
Casting time: 1 action
Duration: 1 minute, Concentration
Effect: Illusory snakes encircle a creature and restrict them with force. If the spell is successful they take damage each turn for the duration and are restrained.

Now it’s time to put in your first pass on the numbers. You probably won’t get this right the first time, so don’t worry about that initially. Just get some numbers down and balance it in later steps.

Targeting comes in a few flavors and each is different. Typically you can only target things within the spell’s range. Targeting is either based on line of sight or not. Targeting involves types specifications like person, creature, object, or location. You can also add in targeting adjectives like friendly, hostile, willing, or known to really complicate things. In the spells available in the core 5e rule books, targeting tends to be fairly specific. In the case of combat, almost all targets are within line of sight.

When choosing targeting consider how minor changes alter a spell’s overall utility. Increasing the range on existing spells might severally alter their balance. Knowing how existing spells work with range and targeting really helps when designing your own, so look at similar spells when trying to set up targeting for yours.

Attack rolls are next. If the spell is a combat projectile, it typically needs an attack roll (excluding magic missile and AOE spells), and if it’s not a projectile it either just happens (healing spells, divination, some illusions) or it has a save against it. Fireball is an AOE, or area of effect, spell. It doesn’t have any spell attack roll associated with it, but creatures in its radius make a save against it instead (saves negates half damage in this case).

Spell saves are against the caster’s spell save DC and the type of save is dependent on the type of magic. AOE spells are typically Dex saves, Enchantments and Illusions are usually Wis saves, and Str and Con saves come up situationally with different spells in different schools.

The spell now has a range, targets only visible creatures, and has a chance for the spell effect to be removed with a Wisdom saving throw. At this point the spell is ready to get damage added to it to fill in the X’s in the description.

This step is by far the easiest to do, but the hardest to get right. You are literally just choosing a how many of what dice you want players to roll for this. A good starting point is to look at existing spells as a baseline or go with your gut. I won’t belabor the point too much since we’re going to balance the spell soon after this.

Step 6. Balance Your Spell and Assign a Spell Level

You’ve made a spell! Congratulations! Is it any good? Probably not. There’s a million reasons why your spell might be unbalanced, useless, or even just plain bad. But that’s what this step is here to fix.

Once you make a spell it’s important to look it over and fix obvious mistakes. Then, if you’re brave enough, take it to the internet and ask for advice and help balancing it. Sure, you’ll get a bunch of comments that are rude and unhelpful, but eventually you’ll also get good feedback that is helpful to everyone. Just ignore the obligatory “You shouldn’t use homebrew, the spells in the books are fine,” comments. Those people don’t know how to let people have fun.

So, how do you go about balancing a spell? For starters you examine its effects and ask some important questions:

Those general questions weed out a lot of spell issues right off the bat.

You can see how these questions lead to easy actionable steps to balance the spell, but not all parts of a spell are so cut and dry. To illustrate this, the example we’ve been using has been made poorly on purpose to showcase how many changes it needs and where the spell level needs to be set. Let’s look at our spell and then an adjusted version of it.

Serpent’s Grasp
School: Enchantment – Level 2
Components: V, S, M (a small live asp)
Casting time: 1 action
Duration: 1 minute, Concentration
Range: 60 ft.
Effect: Illusory snakes encircle a humanoid you can see and restrict them with force. The spell ends on a successful Wisdom saving throw. On a failed Wisdom save the creature takes 1d8 damage and is restrained for the duration. At the beginning of each of your turns the target will take an additional 1d4 for the spell’s duration. At the end of each of the target’s turns it may repeat its Wisdom saving throw. On a success the spell ends.

The differences are subtle but important, and I’m sure that the spell could use more balancing beyond this. But let’s break down each change so you can see the differences:

So that’s it. This spell is finished. The spell could easily be added to any caster class spell list. It was designed to be something that is useful and damaging at low levels so that a caster wouldn’t have to choose between aiding their team with utility and dealing damage in the fight. If you think this spell is too weak or too overpowered, you might be right! Contact us and let us know your thoughts.

Create Your Own Spells

Part of the fun of DnD is all the fantastic things you get to come up with on your own, and spells are no exception. If you want to use custom spells and homebrew in your game, go for it! While it’s important to remember balance when you construct your game, using homebrew can be done right and a good group will work with you to help make things fun, regardless of any ill advised spells you may end up making.

If you’re looking for a handy spell creation cheat sheet, our email subscribers get access to PDF downloads of nifty printables like the one pictured below, as well as other creations and exclusives as we make them. Sign up for our newsletter to get them in your inbox. 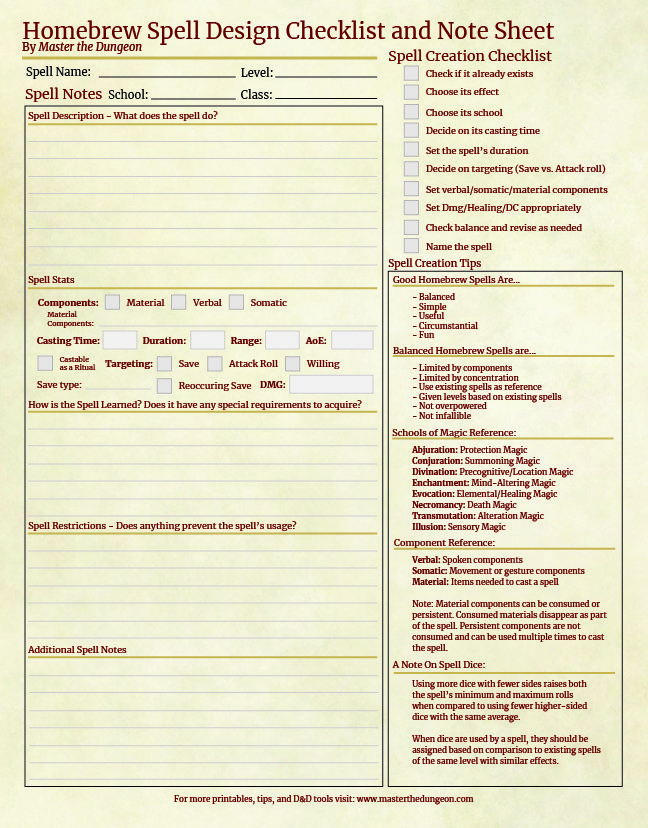