NPCs are a really critical part of DnD. Often an amazing story lives or dies on the backs of good NPC development. Everyone should be using good NPCs and everyone should be role playing the heck out of them. But here’s the reason not enough people are: designing a memorable DnD NPC is hard. Not only does an NPC needs stats and traits, but they also need motivation and depth.

While players can get away with having a paper thin backstory, NPCs get their limits tested all the time. Players always ask too many questions and you might not be ready for them all.
So what do you do? Making an NPC for each scenario would be an impossible nightmare.

One of our writers once went to the trouble of populating a whole town and the party was out of that place in two sessions. Hours of work thrown out the window! The good news is that you don’t need to let this happen to you. This article will cover the tips and tricks needed to make NPCs the easy way while still developing memorable characters that your party will love.

There are a ton of DnD NPC generators out there. They all have their merits as well as their problems. We’ve listed some of our favorites in our Resources Section. For this article, we’re going to be looking at one in particular. You might be asking how you’re going to get an amazing character out of a random generator, and you’d be right to have your doubts. But the secret here is that the NPC generator is just the tip of the iceberg!

Let’s start with DonJon’s Random Generator. We’ve talked about using DonJon before; it’s a great tool and it deserves your attention. Under their Random Generator they have a tool to create randomly generated NPCs. This is fantastic on its own, but like we said, tip of the iceberg. What you’ll get to start with is a list of characters with stats, classes, and most importantly: traits. The sample below is just our first roll of this table, and it gives us a lot to start with. Let’s grab the first DnD NPC we get and start from there. 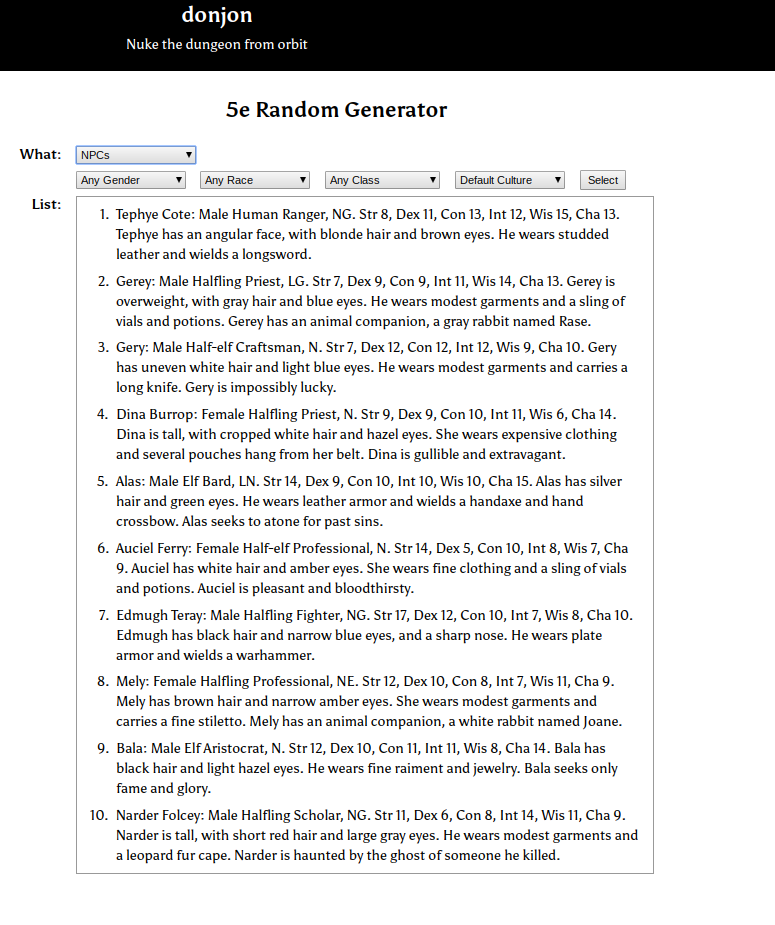 So now we have Tephye Cote. Weird name, but great for fantasy settings. They’re pretty average as far as NPCs go. A human Ranger, nothing crazy right off the bat. So what’s going to make Tephye a great NPC? To elevate Tephye, we need some purpose, some drive.

I know a lot of DMs who start by adding on appearance traits, but those are superficial and fairly uninteresting. Instead, we recommend you start with motivations. For our example, we’ll go to Springhole and get a random motivation from a table. So instead of boring old purposeless Tephye, we now have Tephye the Ranger whose motivation is to find a lost [minor villain]. Cool.

You might think this doesn’t get us very far, but it’s easy to extrapolate and work this into your party’s story. Let’s say you rolled up Tephye as a random character at a bar that your party wandered into. While they might question Tephye about a few things, he might question back. “You haven’t run across a man with black eyes, have you?”

Whether or not your players ever have, Tephye now conveys some will of his own. While this is a good start, it isn’t quite enough. The best way to round out this NPC is to start asking questions about Tephye and extrapolate based on what we know.

Before your players even get a word in edgewise you should already know what Tephye is doing in this bar. Why this bar in particular? He’s looking for someone, but why? Did they curse his friend? Does he have a package he has to deliver? Is he in a rush? All of these things should be considered after getting the basics.

Your NPCs can seem a lot more convincing if they seem to have a volition of their own. The best way to achieve that is to get these questions about them queued up in your mind right away so that the NPC is answering these with their actions and responses to the heroes.

When we ask questions that fill out motivation, you can start picturing how a character will act. An NPC takes actions on their own, especially if you are about to fold them into the story. It’s important to remember that the way they act initially may be tied to their motivations. Tephye could be abrupt and rushed as he’s leaving the bar, eager to pick up his pursuit. But if the party follows Tephye, he might warm up to them as they work towards a common goal.

If you really want an DnD NPC that your players will remember you need to give them some character. Tephye was kind of boring to say the least, but he might be more interesting if he has an obvious facial scar. It sounds kind of lame, but remember, D&D is built on over the top tropes. Let’s look some other examples you can use.

You enter a tavern and ask for a drink. The Bartender comes over and pours a drink for you, the bottle held in his hook where his left hand used to be. While not fat, the man has a gut and has seen better days. You can tell he’s strong and any would-be thief should think twice before stealing from the till. Despite his gruff exterior the Bartender has a soft and friendly voice and a strikingly warm smile.

While walking across the town square, you cross paths with a slender elven girl with long, platinum hair. While clearly not appearing strong, she carries a huge greatsword strapped to her back. Though it’s unclear how, she seems unencumbered by its massive weight.

These examples are simple, but both set up an expectation and in some way defy it. Tephye is the subtlest, being a personality change behind motivations. The Bartender, being jovial but scary looking, can lead to some fantastic stories. And finally, the diminutive elf with a gigantic sword just stands out like a sore thumb.

These characters have some life, some personality. And that underscores the main point here: no character should be boring. Everyone has something about them. They might not seem all that impressive in a crowd, but each NPC should have hidden depths.

Notes and Coming Back Around

Just because you roll up a character that seems to be going places and doing things does not mean your group will interact with them. You will probably never use half the NPCs you roll. This sounds sad, but it’s actually great. It gives you practice making them, but it also keeps the players talking to new and interesting NPCs.

Once you have a character, open a Google doc and paste them into it. Throw in a few notes about what they said or did and then be okay with that character disappearing from the story forever. Your players may go anywhere and that doesn’t have to align with needs of your generated NPCs.

While it’s sad to see an NPC go, the best part about an NPC leaving the story is when they re-enter it. Imagine, four sessions later your team tracks down an evil wizard and are about sneak up on him when they see Typhe, sneaking up from behind, trying to get a jump on the same evil wizard. Your whole group will go “That’s the guy!” and the familiarity breeds immersion.

This can get as deep as you want. Your players could back to the bar and find the Bartender passed away. They could run into the elven girl later, who is now without her greatsword. Use the unique and memorable traits that you built to show the passage of time. Time effects all things and your NPCs are no exception to this rule.

Improving on the Basics

If you want an easy way to make the most out of your NPCs, we’re sorry to disappoint here. For the best NPCs, you need to give them a touch more personality than a generator can give them. To do this, you need to role play. Plain and simple, you need to get into character and talk to your players as that NPC.

If you struggle with this, that’s fine. Everyone needs practice to get into it. Typically you can do this more with caricature NPCs. A gruff orc has a personality you can see right away. It’s much easier to act out then a normal guard or commoner. For a great example of some fantastic NPC work, you can look at Matt Mercer’s NPC from Critical Role: Victor, the black powder merchant.

Now obviously that’s a professional voice actor, but your performance does not have to be that amazing to get good results. Learn from what he did. A normal merchant became and interesting plot point, and if you look at future interactions you’ll notice that same character is missing some fingers, showing some more personality and the passage of time. It might be a silly example, but over the top is memorable and will bring a lot of fun and excitement to your campaign. The more character your NPCs have, the more your players will want to interact with them.