When designing traps, it’s easy to overlook falling in a hole due to its simplicity and the tropes surrounding it. A simple pit, the edge of a cliff, or a treacherous climb- each of these can become a trap if set up and used properly. For today’s Trap Tuesday, we’re going to look at how to use fall damage and make it meaningful for trap design. Sometimes your players just need to fall in a hole.

How Does Fall Damage Work in 5e?

When falling in 5e Dungeons and Dragons, a player will take 1d6 bludgeoning damage for every 10 feet that they fall. A fall of 20 feet could kill a level 1 wizard. A longer fall can deal up to a maximum of 20d6 damage! 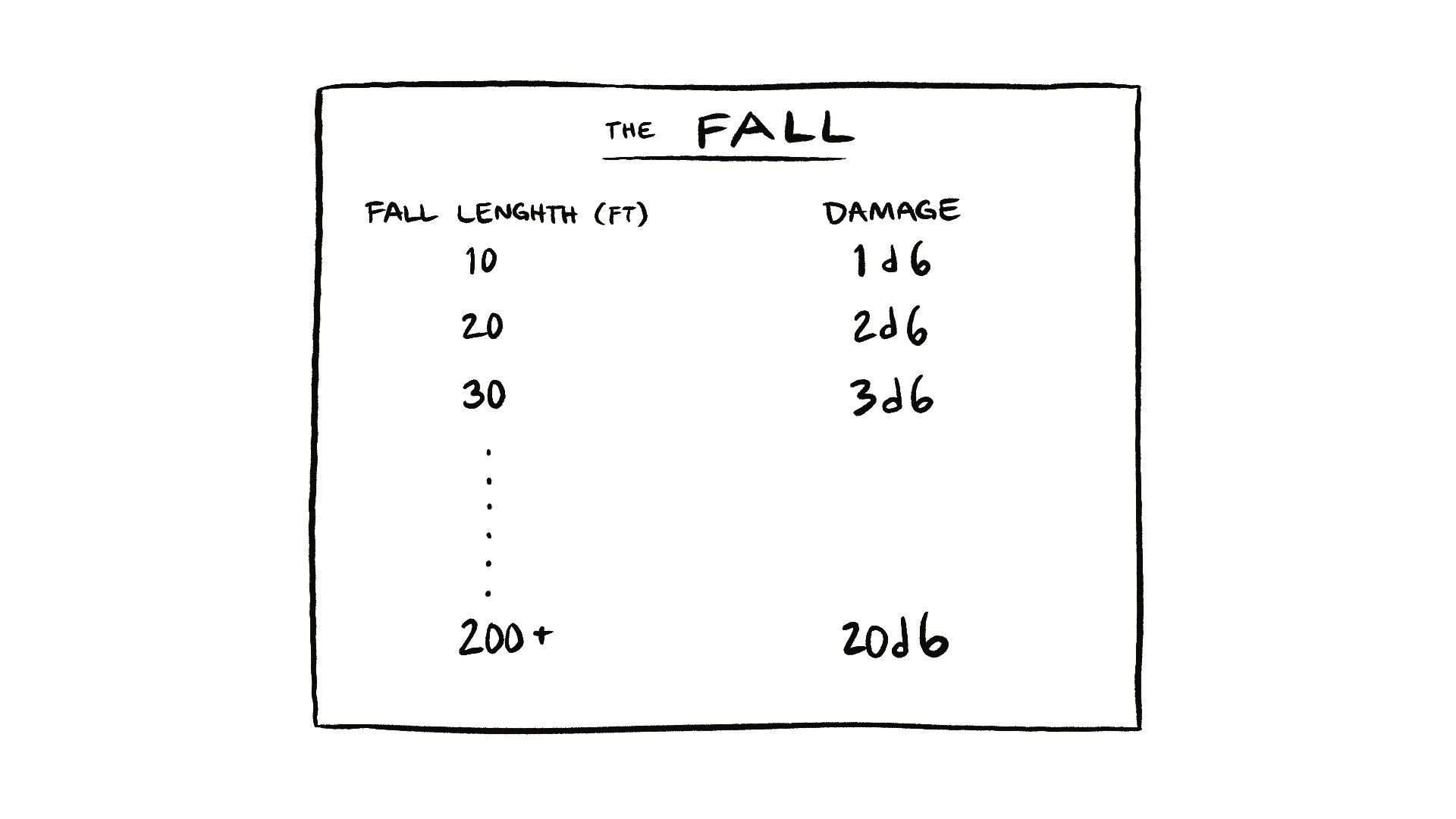 Fall damage does not care what size you are based on the rules in the Player’s Handbook, but we recommend that you do not apply fall damage to creatures weighing less than a pound (in the tiny size class or smaller) since terminal velocity for them is much slower than that of larger creatures.

In real life, rats and mice can survive falls from thousands of feet, so it makes sense to impose a cap on who takes fall damage. In a similar vein, don’t increase fall damage on larger creatures because terminal velocity does not work that way in real life either.

Falling in a Hole in Your Game

Falling as a source of damage is often overlooked, even though it’s one of the most common dangers that an adventurer can face. A 10ft fall can happen relatively easily for any number of reasons, and at low levels that damage can be critical. While no one wants to say “My character died in a slip and fall accident,” falling can be a real hazard.

One way to introduce fall damage in traps is to make your dungeon more vertical. The standard dungeon layout is pretty flat, but there’s no reason a dungeon can’t be built into a gorge or deep cavern. Think of a goblin society living in the walls of an underground fissure with narrow paths and makeshift bridges everywhere. These environmental hazards are non-conventional traps that pose a problem for larger creatures and make the whole process of navigation difficult and deadly.

Another way to make use of fall damage in traps is to make the vertical design a path to progress as well as a hazard. If your players need to climb up or down it can be difficult, especially for low strength adventurers, and could lead to a fall. In certain cases, you can make areas that your players need to jump or drop into on purpose. Perhaps an old staircase is completely unusable; the party might have to climb in a roundabout fashion to get to their next objective point.

These kinds of obstacles allow your players to attempt to overcome the situations in unique ways. The main goal is presenting them with a challenge that can be solved in multiple ways but has a very obvious consequence for failure. Every player will be aware of potential fall damage after the first missed step. 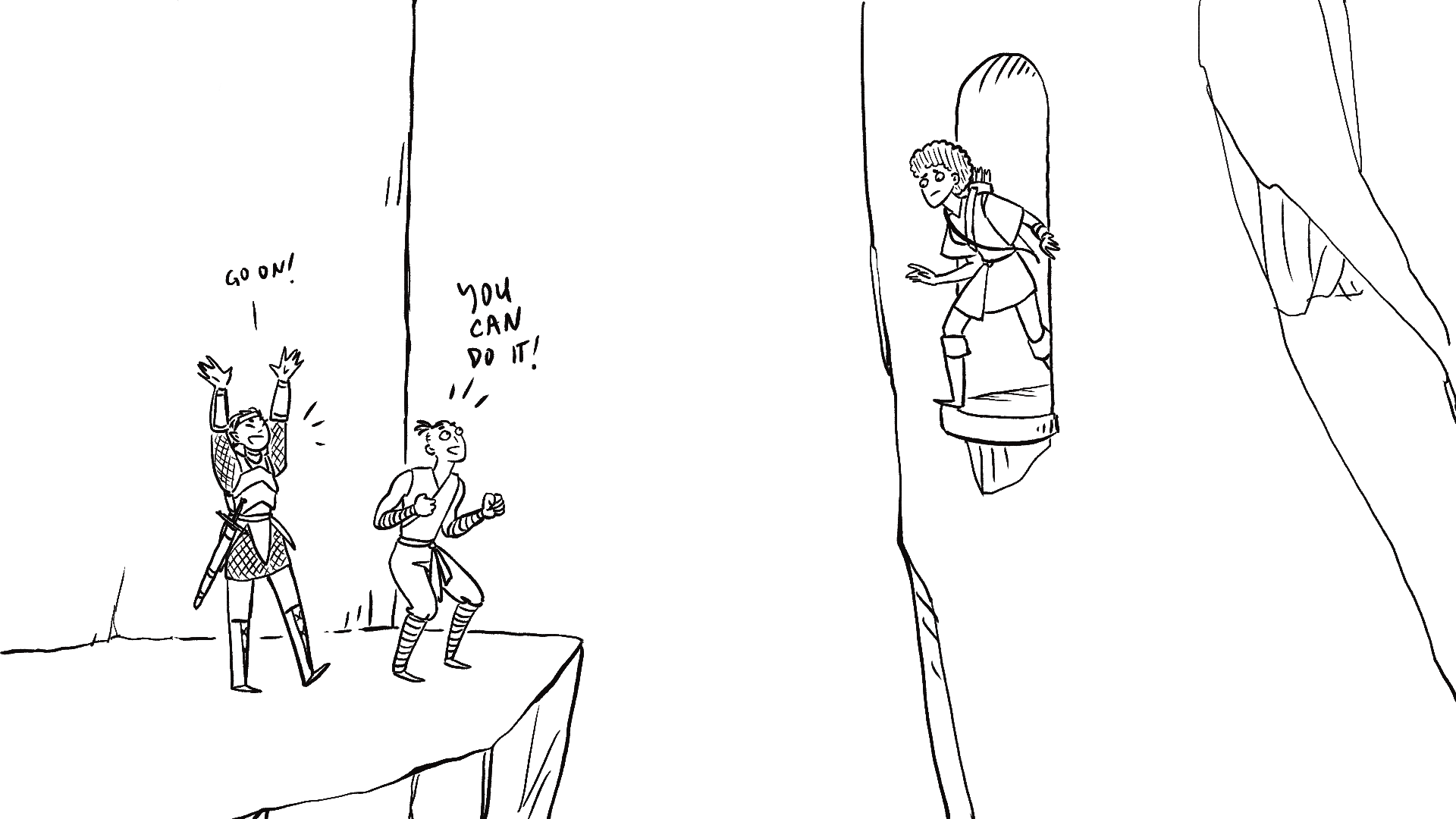 Falling in a hole is a good trap to use frequently due to its versatility. The trap is simple, but its solution can be complicated. If you design a dungeon with more verticality, you can use falling as a form of navigation. Once players fall to a lower level they might find a new path to take. How would a player meet up with the rest of the party now that they’ve fallen down?

Another way to make falling more fun is to make more rolls for it. If you only have a single check before damage, it doesn’t seem very fair to your player. It’s essentially a save or die if the fall is great enough. This can be adjusted by designing your falls to be tiered. If a player fails the first save they begin the falling process but have a chance to grab the ledge. If they fail the second save they miss the ledge but still have a chance to hit a lower platform. Use the tiered approach when players just miss the DC for the save.

These degrees of failure allow you to build a trap that could be very deadly, but still allows the players a chance for success. If you use different checks for the varying stages of falling, you can have ways to balance the trap for different characters. Where one character might be weak and fail a strength check, they could be dexterous enough to succeed at grabbing onto the ledge. This kind of experience makes the traps not just more fair, but more fun. Each roll builds tension and the created situations add to the game play.

Telegraphing traps is always important, but with falls you need to make sure the players are aware of the risks immediately. It’s best to introduce falling in a hole traps the same way a Mario game does. The first fall is safe, the next is less safe, the last ones don’t pull any punches. The group gets warnings about the use of the trap, so the building danger makes sense. The players should be more aware and prepared for each area.

You might not be sold on using fall damage in your game, but giving players simple dangers can help ground a group and wipe away any thoughts they might have of being invincible. If you want to drop some falls into your next game, give a vertical level structure a try to see how your players react!