The party enters a plain room. Seeing nothing of interest, they make their way to the door on the far wall.

As soon as they hear the sound, they notice the door behind them slam shut as the door ahead does the same.

Ancient gears  whir to life as the ceiling begins to slowly descend. Our heroes’ fate is sealed! Or is it? 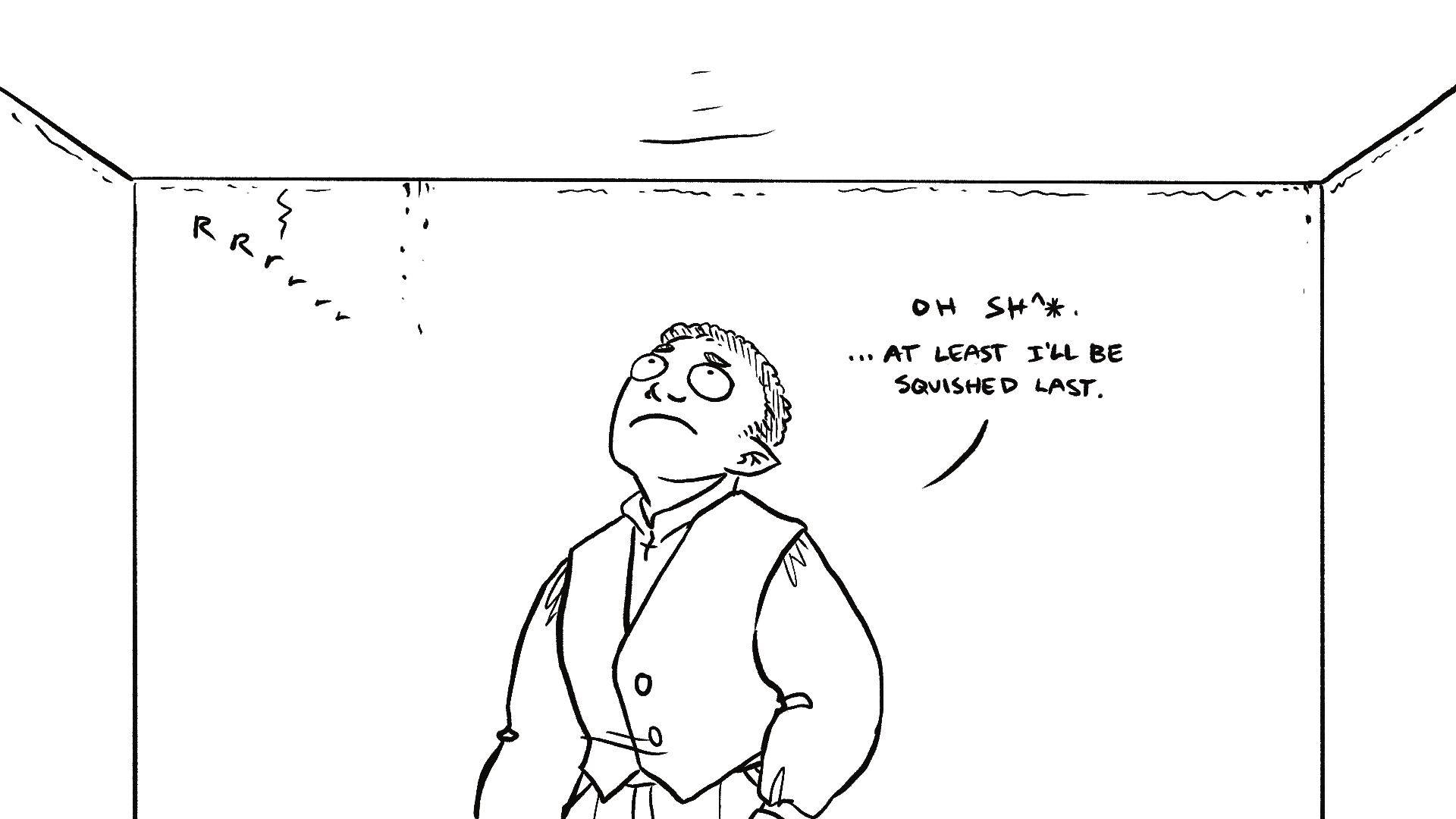 We’re going to look at the basic uses of the crush trap and a few options for customization. The whole idea of it is very simple: trap some players in a room and that room gets smaller until the players escape or are dead. The trigger and disarming of this trap are really variable. You can use almost any trigger for the trap to go off since it’s the whole room being affected.

Because there are so many variations on this trap, let’s focus on how to make it fun rather than using the standard mechanics.

Crush traps are all about time and tension. The trap, after being triggered, moves slowly.

If the trap moved quickly, it would be very deadly and very un-fun.

Because it puts the thought of imminent death as the main thought in your players’ minds, automatically making the stakes higher. Higher stakes means a bigger rush and more endorphins when the players aren’t crushed. 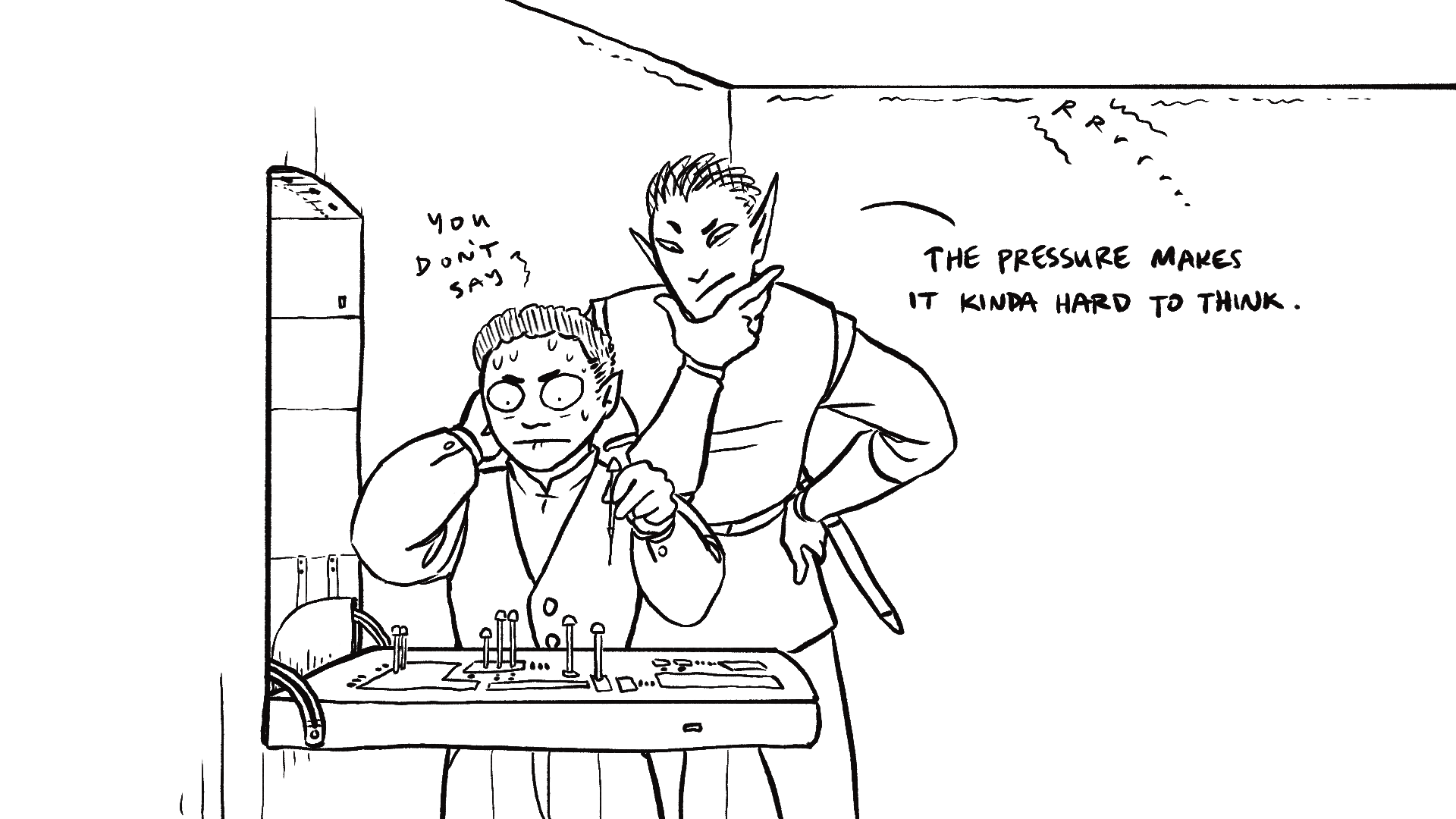 Keeping Up the Tension

So we get that the tension itself can be a fun experience, but how do we ensure that experience is actually a good one? Players might lose hope and resign themselves to their fate. Players might have no fear of dying to traps because you’ve been too soft on them, so they never get scared for their character.

In both cases, the tension is destroyed because the players don’t see their actions as having a meaningful impact on their success.

Autonomy is the key to balancing hope and despair.

You need to add an interaction layer to these traps to give your players opportunities to make choices. We’ll touch on some examples in the sections below, but for now, just remember that tension should be maintained by what your players do. They need to be the ones to release that tension, be it by disarming the trap or becoming floor paste.

If you want to spoil the fun of a crush trap, just break the tension. This can be achieved in a few ways, but the most common ways to see these fall short happen all the time.

Some NPC or mystic force saves the heroes at the last second. This is a fine story device, but it makes the trap super lame. There are no stakes and the tension is released by the DM, not the players actions. No tension, no feeling of success or failure, no fun. 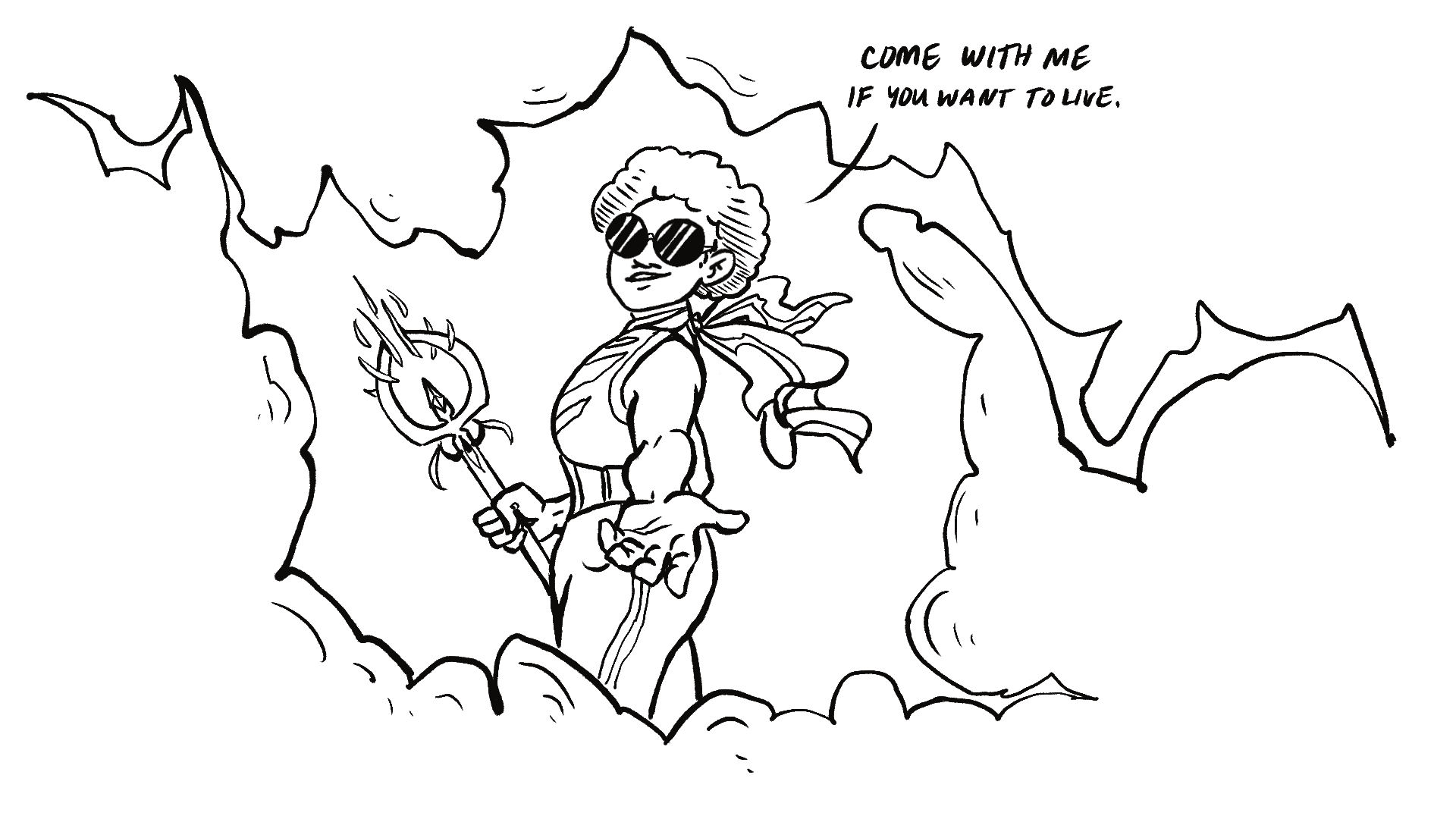 Too easy or Too Hard

This is hard to get and is seen with puzzles all the time. If your mechanism for the trap revolves around a puzzle, the difficulty can change the tension very rapidly. If it’s too easy, no tension builds, if it’s too hard, tension is released as despair sets in.

The best way to handle this is to make a puzzle that is mechanically simple, but takes time to complete. This can be something like a labyrinth maze, where a wrong turn eats time, building tension. Similarly this can be a nesting clue puzzle where no one part is too hard, but there are so many pieces messing on up more than a few will cost everything.

Too Slow or Too Fast

This mistake is just a calibration error. The problem here is not the actual speed of the trap, but instead your explanation of its pacing. Make sure your players have the sense that the trap is enclosing on them and that they can understand the rate at which it moves.

If you want to improve your crush trap, don’t fudge the mechanics of it, the solution, or introduce a miraculous save at the end. Instead fudge the pacing of the trap. The closer they are to solving the puzzle or completing the fight, the closer the trap should be to crushing them. It makes the escape look heroic without having to adjust how difficult the trap actually is.

If your heroes make quick work of the puzzle, make the walls close in faster.

If your heroes are slow as mud, slow down that falling ceiling a touch and let them figure it out. 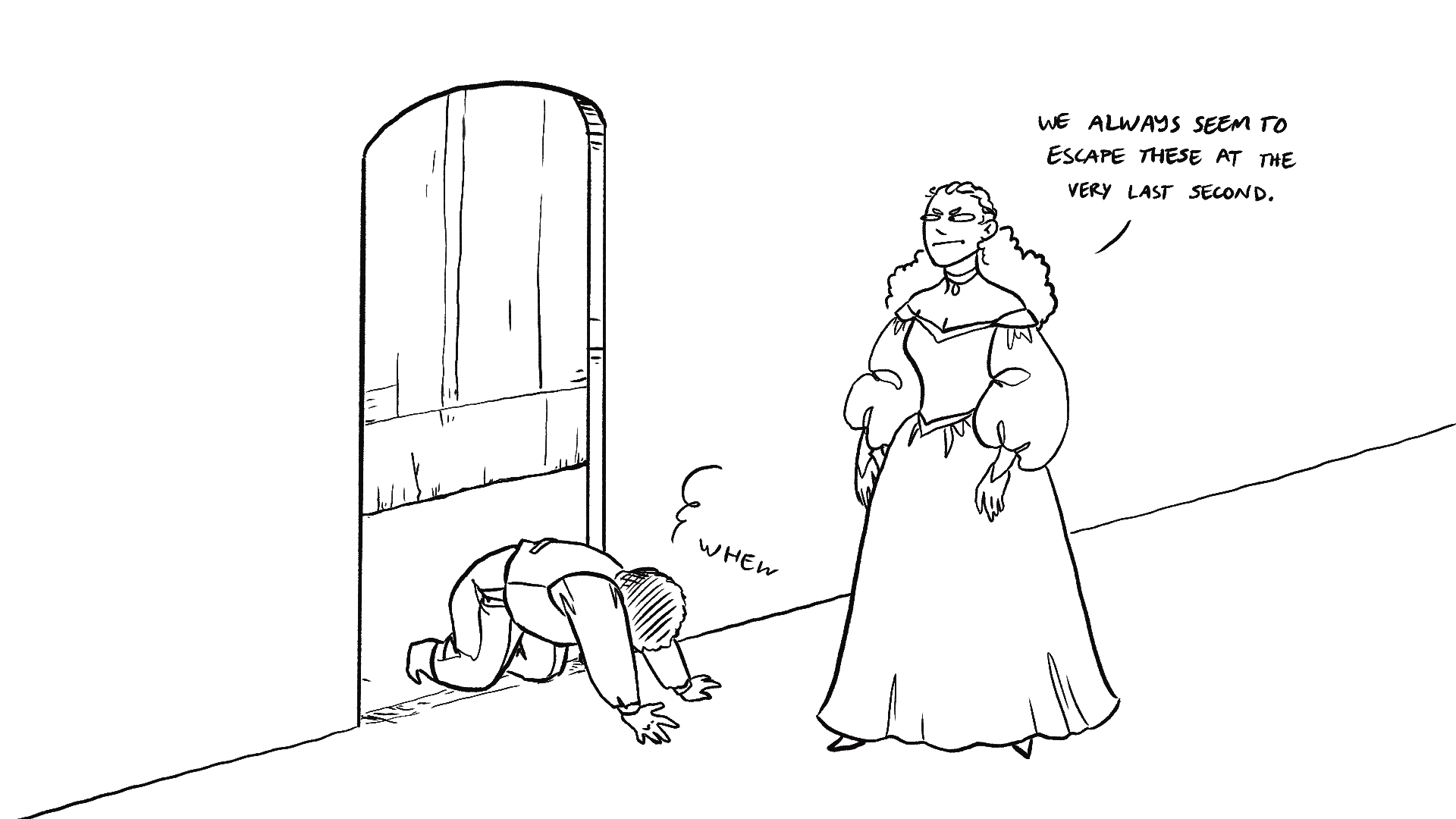 When to Crush Your Players

So if you’re controlling the speed of the player’s impending doom, aren’t they actually safe from danger? Well, yes and no. The trap should still be dangerous and you should crush them under two distinct circumstances.

Option 1 – The players give up. If they give up when the puzzle is very clearly solvable and accept death, you should crush them. It’s better if it’s not a TPK, but if that’s the way they want to go, don’t chicken out and miraculously save them.

Option 2 – The players do something stupid and ignore consequences. If they understand the condition for survival and play counter to that condition, crush them. Crush them into a fine paste so that future adventurers might hear the story and learn from their mistakes.

Now to be honest, if either of these things happen, your party had some problems to begin with. Likely that comes from your players themselves or a general lack of cohesion in the group. Maybe you have a problem player to deal with. Maybe your descriptions weren’t helpful. No big deal. You can always start again. You can always find some way to salvage your story, reset your party, or just continue on.

The important takeaway here is that if you use these traps, you should know if your party can handle them. If they can’t, don’t use them.

Want to make your crush trap cooler? Add spikes. Now your trap is rad and pointy.

This is the most common variation of the trap and makes little difference. Your players will die to piercing damage instead. Woo.

Another variation includes splitting the party. Half the party is in a room that has a crush trap with information about a puzzle that needs to be solved in a room to turn the mechanism off. This is neat because the players need to work together to solve a visual puzzle and you just need to poke at them with descriptions periodically. Think Indiana Jones and the Temple of Doom.

You can move away from the puzzle angle by introducing solutions that involve strength. Having a solution that involves the team refusing to be crushed by holding the ceiling in place with a weapon or group strength until the timer resets can change the feeling of the room. This option lacks some of the same autonomy that the other types have, but overall it’s a simpler implementation of the trap.

Lastly is combat variations. There are all sorts of fighting sections you can do with a smaller and smaller room and this works super well when using a battle mat. If you want to have the players defeat the opponents to open the door, or even have the door open and they need to fight their way past enemies to get there, both options work well. In some cases you might even want to put a key item in the room to use the room to crush an overpowered enemy and escape.

Having a Crush on Your Player

Crush traps are often used to poor effect because of how they get set up. The examples and tactics we went through today should help pump some life back into these classics. Remember, sometimes your dungeons just want to give your players a hug.

Did you try this trap in your campaign? We’d love to hear about it. Tweet at us or shoot us an email.